The Bog Post Diaries. Getting Sloshed at the Rockfest.

I went to a festival last night. The local village Rockfest. I got to stay up late past ten o’clock. Yes, I know you’ll be shocked, me being the classy, organic chick that I am and all but hey. What can I say? Sometimes Mummy’s just have to get down with the sounds and chill.

We are currently in Devon in the Uk staying with my family. When I found out that we were to go to a festival, the first thing I thought of was not how much fun and joy my beloved children were going to have mingling with their cousins that they haven’t seen for three years.

My first thought was, how much is this going to bloody cost me and will there be wine.

Because I am resourceful and have a serious drinking problem,  I instructed Brian to whizz to Lidl’s quickly and buy a couple of bottles of red – under a fiver mind. This would see me through the night nicely thank you very much.

Getting Through Security With My Stash of Wine

Luckily it wasn’t the sort of fest that checked your pockets for knives and tweezers and wine bottles, no, there were homemade cakes, raffle tickets and a Mr Whippy van.

At the entrance, two elderly women volunteers, a bit older than me, were giving away free cancer research pansies that they had crocheted themselves. Very nice.

We went to pay. An old man who stood guarding the raffle tickets with his life saw me and smiled. Obviously thinking “here’s another tenner”.

I wanted to announce while pointing smugly to the wine stashed under my arm   “Don’t think you’ll be making any money out of me at your rip off charity bar Fella” but instead, I said “that’s a nice florescent jacket you’re wearing Sir, are you a real policeman?” and went nicely on my way.

As the day wore into the evening and I’d had my fill of cups of tea and stale biscuits I started on the good stuff. The kids got a bit nervous when they saw me pouring my red wine out of the bottle like one of those strange men that I had warned them about in New York.

9 o’clock came and went and when my teenagers started to see the effects of the red wine taking hold they tried persuading me to go home.

“Why don’t you go back with daddy?” they said in the patronizing voice; the one that they always use when they know I am too far gone to argue  “we will be fine here with our friends, you could go home and do that meditation thing that you always do in bed.”

I quickly weighed up my options. Go home with Brian, knowing that within seven and a half seconds of hitting the pillow we would both be snoring like pigs and twitching all over like two half-dead rabbits OR stay at the Rockfest and get pissed even more. I opted for the latter.

“No thank you, little brats” I wanted to say in my skippy, tippy festival voice “if you think for one minute that mummy is going home when the Gary Barlow impersonator is coming on at 11 pm you have another think coming. Mummy’s staying. And she’s going to be dancing at the front of the stage – regardless of what you or daddy thinks.”

With this I trotted off, nose in the air, holding tight to my carrier bag and my pink raffle ticket.

I think I heard one of Tessa’s new groupie friends mumble to her “what’s wrong with your mum?” and Tessa answered, “she’s just a bit weird”.

I have three very basic middle-aged dance moves.  All three of which see me mouthing the words to the chorus of every song. This is compulsory.

Number one is where you use both hands and shoulders alternatively to imitate a rabbit burrowing through its tunnel. At the same time, (this is the important part), you must bite your bottom lip with your top teeth, hard, so that you resemble someone with a terribly exaggerated overbite.

Real sexy this one. I often see Brian looking at me with utter desire when the teeth dance comes out.

The second movement is a little more modern. I like to use this baby if I’m trying to show Tessa that I’m a hippie chick, flower power cool Mum who can dance like Sandie Shaw.

I stand with my feet glued to the floor, moving only from my knees up. I ignore the fact that I resemble a weeble wobble or one of those blow-up wind man signs that you see outside of car garages. Not to worry. With this, I like to do a freaky thing with my fingers, make like I’m untangling two invisible wigs.

I reckon it looks psychedelic, but once I was asked if I was doing sign language so I’m still perfecting the technique.

And lastly, number three. This is the dance move that I like to call the choo-choo train. This one sees me literally impersonating Thomas the Tank Engine, only I try to do it with a sexy “come and get me Gordan’  look in my eye. 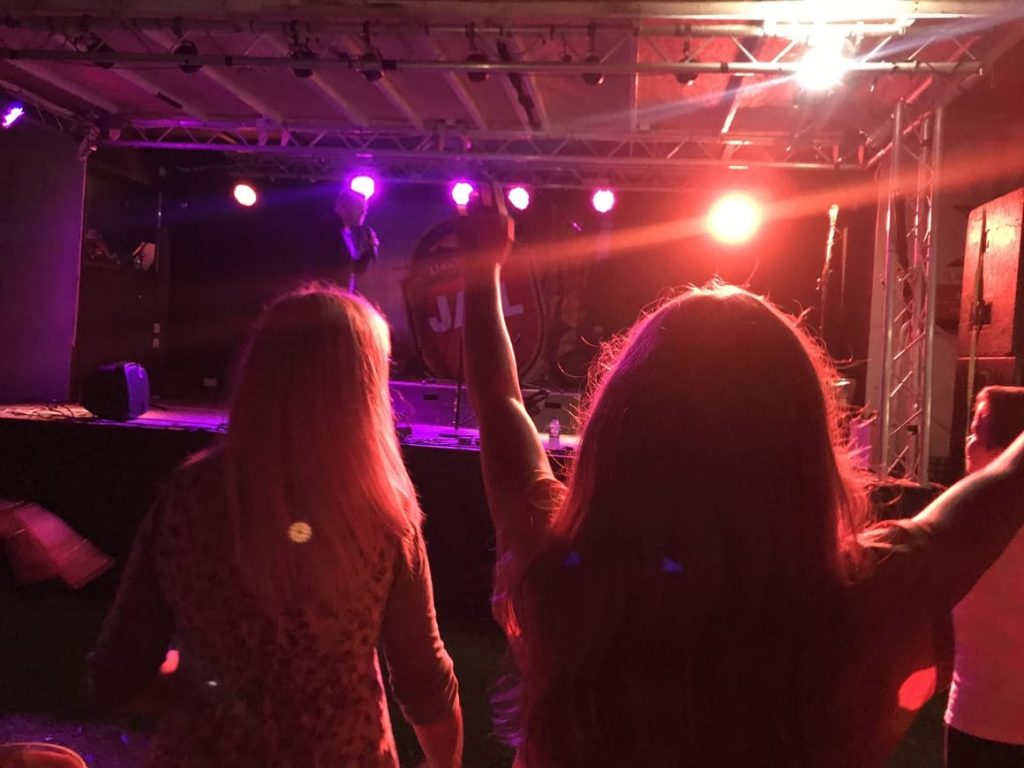 I haven’t got a picture of me doing the choo-choo train dance, only this one of the back of Tessa’s head. If you want to see the video you’ll have to subscribe and become my best friend.

Personally, I thought the Neil Diamond looky likey was the best.

I like a man in a black wig and a white waistcoat, especially when he keeps looking over at me and giving me a wink. Teasing me. Wanting me to partake in a bit of his crackling rose.

But he was only on as a filler,  the real highlight being ‘Grey Sabbath’ a heavy rock band from London or maybe Camborne.

I got a little nervous when I saw the rocky band pulling up in their transit van.

Out they stepped from the back of the truck, shrouded in a cloud of vape fumes and swigging what I could only imagine was whisky out of a Tommy tippet cup. Dangerous stuff. Very Guns and Roses.

They loaded all of their gear out of the van and then looked toward the stage where I was rocking some moves to Niel Diamond’s last couple of numbers. I locked eyes with the female lead singer.

Beautiful with her long black hair down to her tiny belted waist, she rested her sexy eyes on me and then shook her head in disbelief as if to say:

“Are you fucking kidding me? All that way down the M4 in the back of a van and the only person at the front of the stage is some weirdo alkie wearing a crocheted cancer research flower dancing like R2D2?”

Gorgeous she was. Gorgeous and rock chicky. A bit like me but taller. Skin tight black pants, studded belt around her teeny, tiny waist and a sleeveless purple vest. She didn’t even have to stand with her hands on her hips and contort her arms forward so that her triceps looked ripped.

I cursed myself for not wearing my new purple neckerchief. The one I bought from the National Trust shop in the sale last week. The one with the printed oak leaves and little dog bones.

Rock chick and her hooligan bass guitarist lover. Turning up to the village festival like Sid Vicious and Nancy Spungen.

Him, tattooed all over with the vape in one hand, microphone in the other, kicking the speakers and yelling out across the half-empty field “Are you hearing us out front you mother f-u-c-k-ers?”

Well, they didn’t actually say that he just said: ‘all good out there folks?’

I fancied Sid. I don’t mind telling you. I did. I found the overpowering smell of patchouli oil and raspberry vape very attractive. Every time he shouted, “Are you hearing us out front rockfest?”  I got very excited. I kept putting two thumbs up in the air and yelling “Yeeesss!! We can hear you loud and clear captain”.

All, the way from London to do a rock fest and there’s Jimmy Cranky wearing her crocheted pansy,  jumping up and down with both thumbs up in the air like a halfwit.

I beckoned for Sonny to come and dance with me. “Let’s Party like its 1999!! BABE” I shouted in his face with my red wine breath.

I saw him turn away slightly and close his eyes, probably so that he could block this hideous image of his slurring, sweaty Mother from entering his memory. What the brain doesn’t see it doesn’t know about.

“when are we going?” He asked in disbelief, trying hard to ignore my wig untangling pyschodelic finger moves and the fact that I kept blinking at Sid.

“Going?”  I shouted, far louder than I should have. The old man from the nursing home in the chair behind us nearly sprung off his memory foam cushion.

Me. Twirling around holding my arms out wide and whizzing around like a lunatic.  Wearing the bat-winged tunic that I’d bought from the charity shop in Croatia. The one that I think makes me look tall.

Outstretched Bat winged arms, twirling round and round, thinking that I was a ringer for Kate Bush but actually resembling Jimmy Somerville with a wig on.

If you ask nicely and subscribe to my newsletter, then I might send you out the video of me dancing like a train at the Rockfest. But only if you subscribe. I only share personal goodies with my subscribers. My true friends. A nice little treat for you. Until then. Hang loose groovy readers x

Other related posts that you will enjoy.

The Bog Post Diaries. Pissing my pants in Sri Lanka

The Bog Post Diaries. Saving a beggar boy in India

The Bog Post Diaries. Kicked out of the yoga class in India

The Bog Post Diaries. Pumping my thighs in Vietnam.

I’m totally hooked to festivals now. I reckon I’m going to get a tattoo with rock chick on it. Buy a whistle. Book tickets to Coachella.