Moving Back Into Our Kiwi Abode. Poo And All.

We have been back from our year-long backpacking trip around the world for almost two weeks. Yesterday, our renter’s tenancy agreement ended and we moved back into our house on the hill in New Zealand.

Initial thoughts when I walked through the door? It’s huge.

For the past year, the four of us have lived within extremely close proximity of each other;  the rooms we have stayed in have been…cosy.

Walking into our house felt like a cavern. A bit like St Pauls Cathedral but without the pulpit and the admission fee.

A big house means big work. Too much to clean. I don’t mind a bit of dirt here and there, my view is that a few cobwebs never hurt anyone, but unfortunately my husband doesn’t share my enthusiasm. He likes things to be spic and span and now that he is at home with us full time I am afraid that my grubby housekeeping shortcuts are going to be revealed and met with horror.

When you’re travelling, you don’t have to worry about boring things such as cleaning. Not unless you are house sitting and even then you can just leave it until the day the owners are due back and then crack the whip and run around like a headless chicken — barking orders at the kids.

But Brian is a clean freak. Whenever we arrived in a new country, I would search out aromatherapy oils to rub into my temples whereas he would head straight for the cleaning stall on the market and ask the locals: “Bleach You have bleach? Domestos? Ajax?”

Returning Back To Our New Zealand Home

Sonny flew into his room and wired up his sound system with his fancy lights that flash in time to the music.

I was very good. I let him play his boom box very loud. I never once said, “turn that bloody din down”.

Travelling has mellowed me it seems.

Tessa morphed into Laurence Llewelyn-Bowen, arranging a vase with beautiful dead twigs and lights and feathers and placing it in the corner of her room. She has also colour coordinated her coat hangers. I’ll repeat that in case you misheard the first time.

She has colour coordinated the coathangers in her wardrobe.

How many nights has she lain awake on a sleeper bus in India thinking “when I get home I’m going to have all my white coat hangers to the left and all of the pink ones to the right”. I’m thinking she might go into some sort of fashion design career. Either that or she’ll end up on one of those reality tv show where problematic kids seek help in combatting their obsessive coathanger disorders.

I didn’t see Brian for a few hours when we got home. He ran down to his shed faster than his legs would carry him muttering something about battery chargers and needing to tighten the cam belt on the lawnmower.  I have no idea what he was doing.

I  think he hoovered out the gutters with his electric toothbrush.

Oh, God. I Forgot We Had Sheep

There was one thing I had failed to remember about my life in New Zealand and that is that I own sheep. Four of them.

Sheep are the most unresponsive, unintelligent, uncute creatures on this planet. At least cows can trample you to death and have nice tongues. Sheep are just annoying and have pooey bums and white eyes. 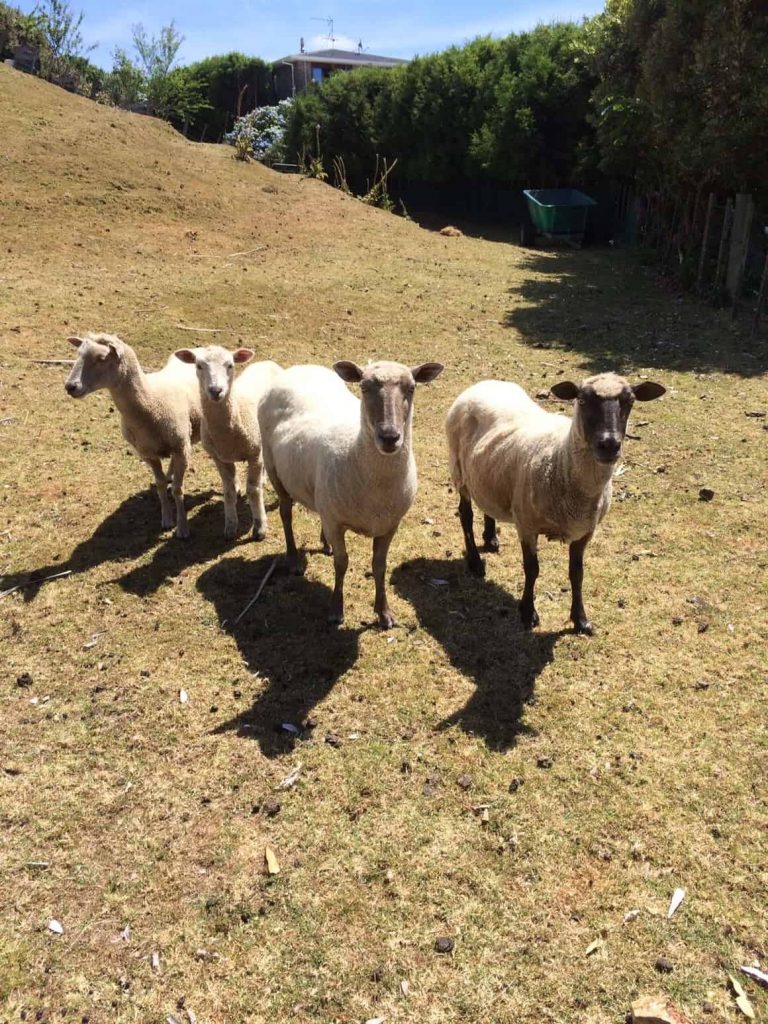 “That’s not a very nice thing to say…”

But, now that I have returned home and am living on my farmette in New Zealand I have decided that I will rise to the calling of looking after my flock.

Starting with my four annoying sheep. This is my duty you understand. I must provide my family with meat for the table and wool for their clothes.

I had an email from the sheepman saying that he would be at our house at 9 am to shear the sheep and would I make sure they were rounded up and put in the pen?

I tried to ask Brian to help me but he was too busy cleaning the laundry powder dispenser out in the washing machine and fiddling with the wire that comes out of the back of the television. Muttering about how the tenants have disconnected the box and now nothing would ever work the same ever again.

So, I poured myself a large glass of red wine and set off for the yonder fields. The ones just behind the washing line at the back of our house.

I was going to wear my wellies to do the job but decided that as they’d been in the loft all year and were full of rat crap I would wear my Ugg boots instead.

I wore them with no socks because this is what cool surfer chicks do.

While other women around the world are laying in a bubble bath drinking champagne and eating stuffed olives with their eye masks on, there’s me,  chasing four idiotic sheep around the field at ten o’clock at night. Huffing and puffing as I navigated my way around the hilly New Zealand paddock in the dark. Trying to avoid slimy green shit — scrunching my toes up in the front of my surfy sheepskin lined boots that are old and have no grip left on the soles.

Praying to God that I wouldn’t slip and break my ankles.

And all so that my half-witted sheep would be in their pen for the morning. Ready to have their hair cut.

Even they get pampered.

We have been busy the past few weeks. We are not ones to let the grass grown beneath our feet — especially not grass that has been heavily fertilised with sheep muck.

When we were in Chiang Mai, Brian and I were hugely inspired by the huge amounts of digital nomads out there.

We made the decision that if we wanted to continue our life of travel then we too would have to find a location free income. So that’s what we are setting out to do.  I am a firm believer that you can be and do whatever it is you want. If someone else is doing it you can do it too. Only better.

So that’s us at the moment.

We are in the throes of starting a completely new venture. And it had better bloody work or else I’ll be selling sheep fur at the side of the road for a living.

Apart from this blog, I have never had an online business. I don’t know the first thing about paid adverts that drive traffic or Facebook ads and pie charts. The whole thing is completely alien to me. And, I’ll be completely honest with you here;  I am scared to death.

I’m scared of failing, scared of making a fool of myself,  scared of wasting money on courses. I go from feeling as though I can be the next Alan Sugar to telling myself that I am being ridiculous. That I am too old, too silly and am being over-ambitious.

But I am doing it regardless. I am going to try it and I will keep trying my hardest until it works.

To have an e-commerce business, amongst other skills, you need to know about marketing. So that is what I will become. A red-hot marketer. I’m taking a course and everything. The real deal. I am determined to give our family the means to be able to continue travelling this enormous, fabulous world.

So, when I make my first dollar I’ll let you know.

Until then, I’ll continue to chase the sheep around the paddock with my ugg boots on. 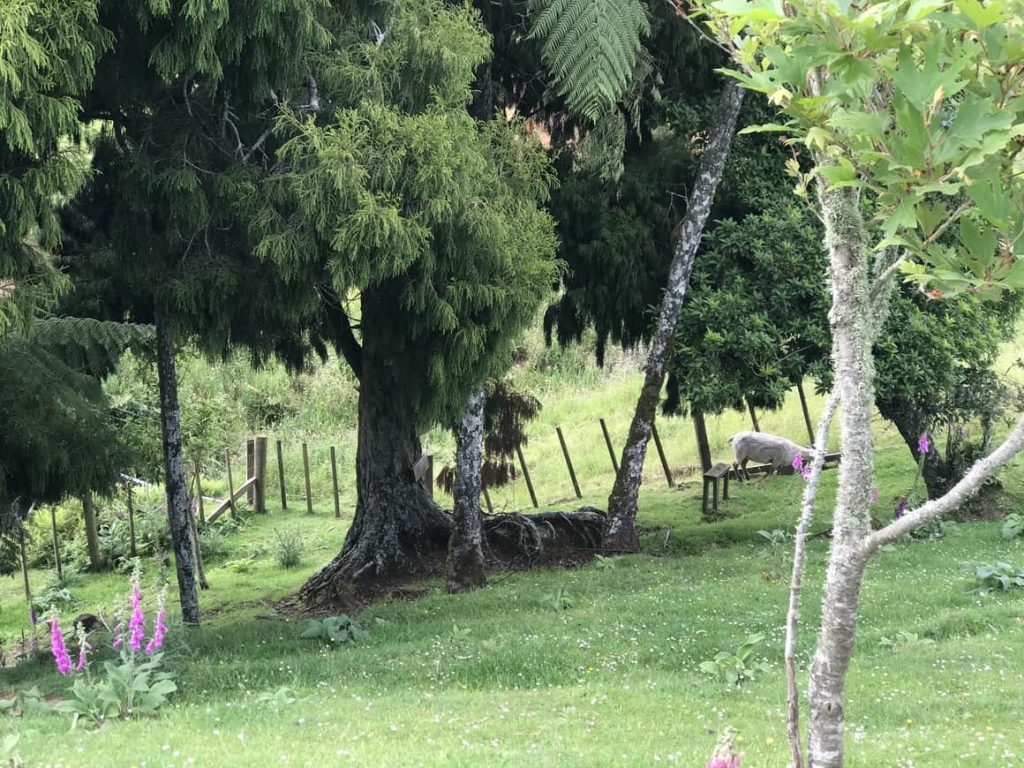 Related Posts You May Enjoy

Emigrating to New Zealand. Will you really be living the dream?

Going home after a year of travel. How it feels

Pessimist Vs optimist. Which are you?

Why everyone should travel with their kids. At least once.

Why we left Britain.