Christmas on the Beach or In The Snow?

How many times have you said: ‘Next year, we are going to have Christmas on the beach!’ Probably remarking that it would be cheaper if nothing else.

But have you ever actually done it or is spending the 25th of December on an exotic beach somewhere with your family something that will remain on your bucket list of travel to do’s?

This post may contain affiliate links. They cost you nothing but we make a small commission.

Why not listen while you read?! One of our most popular podcast episodes – Christmas in nEw Zealand. What’s it (really) like?

You may be asking yourself if it could possibly be the same? Christmas down under.

Perhaps you are thinking of heading to Australia or New Zealand on holiday, or, it may be that like us, you are travelling long-term with your kids.

Or are you planning on taking the big leap this year and emigrating? Let me warn you; when we told people we were leaving the Uk to move to New Zealand a common reaction was: 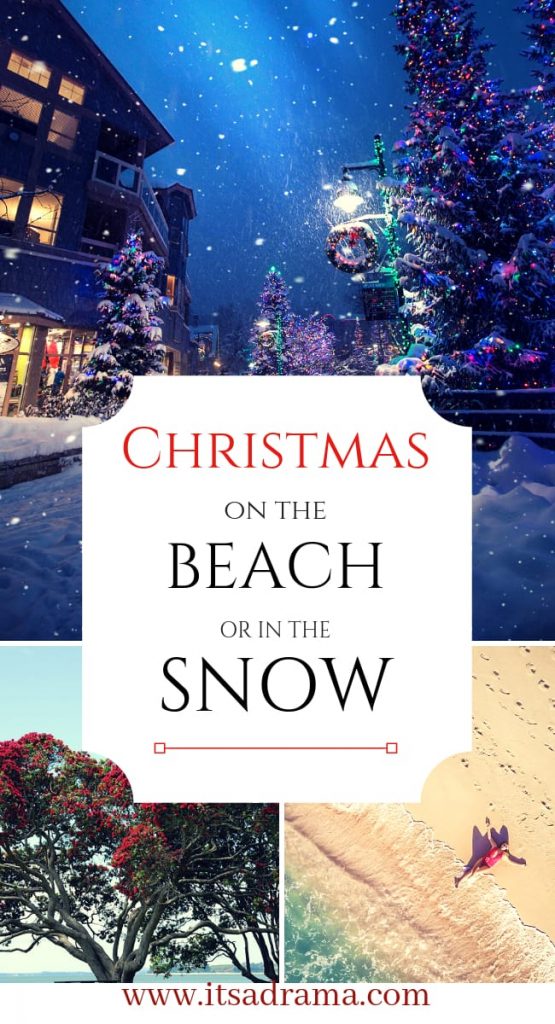 Christmas on The Beach Or in The Snow?

For those of you weighing up whether or not to spend Christmas in New Zealand, here are the main differences you can expect to encounter this festive time.

Remember, we have experienced both.

We lived in New Zealand for ten years and we have just spent Christmas day in Upstate New York where it bucketed down with snow. I think I even saw an elf and a reindeer.

Related posts that you will enjoy

Christmas in New Zealand. What it’s really like. PODCAST #9

The tree wilts and all the decorations fall off the branches which is extremely annoying.

This is because in New Zealand you cut your own tree down (an amazing experience) right in the middle of the new growth cycle.

I suppose you could go artificial but then you miss out on nearly chopping your leg off with the blunt saw. One of the many things I was to learn about living in New Zealand.

Just because you live in New Zealand doesn’t mean you will spend Christmas on the beach every year. The garden is the perfect place to spread out a big table.

Once Boxing Day rolls around every family in New Zealand is desperate to start their summer holidays! This is us camping.

The advantage of having Christmas in the sun is you can buy beach toys that come in huge box’s and so look more under the tree!

One of the best reasons to have Christmas in the sun. Lovely, long warm evenings.

And what better way to celebrate Christmas on the beach than with fresh scallops?

Christmas In The Snow – America

Have you ever seen anything quite so beautiful? Our kids longed for a white Christmas after spending many a Christmas on the beach, and they certainly got it!

Having a cold Christmas means you get to spend lots of time indoors doing really Christmassy things like decorating cookies!

The bliss thing about Christmas in the cold is that you can curl up by the fire and relax.

Spirits are a good deal cheaper in the USA than they are in New Zealand. All that snow makes it necessary to indulge!

What is it about the cold that makes you want to indulge in comfort foods?

Related Posts That You May Enjoy!

25 Awesome Travel Gifts That Kids Will Love This Christmas. Each For Under $20!

3 Hidden Beaches In India That Will Blow You Away

A New Zealand Travel Blog. 20 Things That May Surprise You…

10 Travel tips that you can safely ignore because they’re crap.

Emigrating to New Zealand. Are we really living the dream?

So Which is Best? Christmas in the Snow or on the Beach?

Having Christmas on the road was wonderful for us – and a good deal cheaper! Because we were on such a tight budget we had to get incredibly inventive with our gift ideas.

The best present that I received was this gorgeous travel candle. It lasted me the entire year (I would only light it when I needed to feel a little luxury!) I think it was about $20 and honestly, it was one of the best things I’ve ever received.

They both have their pros and cons, and I still can’t decide. So I did what I always do when I can’t make up my mind about something. I ask the kids.

What’s the main difference between a cold Christmas and Christmas on the beach I asked?

“Having a cold Christmas means that everyone comes together a lot more”.

Don’t tell them I said that though.

When it’s hot, we are always outside. Someone at the BBQ, another down in the garden. Two on the trampoline.   But. When it’s freezing outside you all tend to congregate in one place and either chat or watch something on tv. Either way,  you’re always together.

Note to oneself. Must learn to be more sociable with the kids when back home in New Zeland.

Whatever your preference, if you’re thinking of spending the holidays in warmer climes and are worried that Christmas on the beach might not right, remember, it’s not all about where you are – it’s who you’re with. Whatever you choose to do this year, make it special. Happy New Year!