Everyday life in Japan. 10 Reasons The Japanese Are So Damn Chilled.

No matter how many books and travel blogs you read about Japan, visit the country for the first time and the first thing that will take you by surprise is how incredibly calm and quiet Japanese life appears to be.

Everyday life in Japan is like nothing you will have ever experienced before.

It’s not hard to find culture facts about Japan but to experience the calm and tranquillity of this country you must visit in the flesh.

Only then will you marvel at the way that the Japanese people eat, bathe, practice train etiquette; daily life in Japan is calm and marvellous. 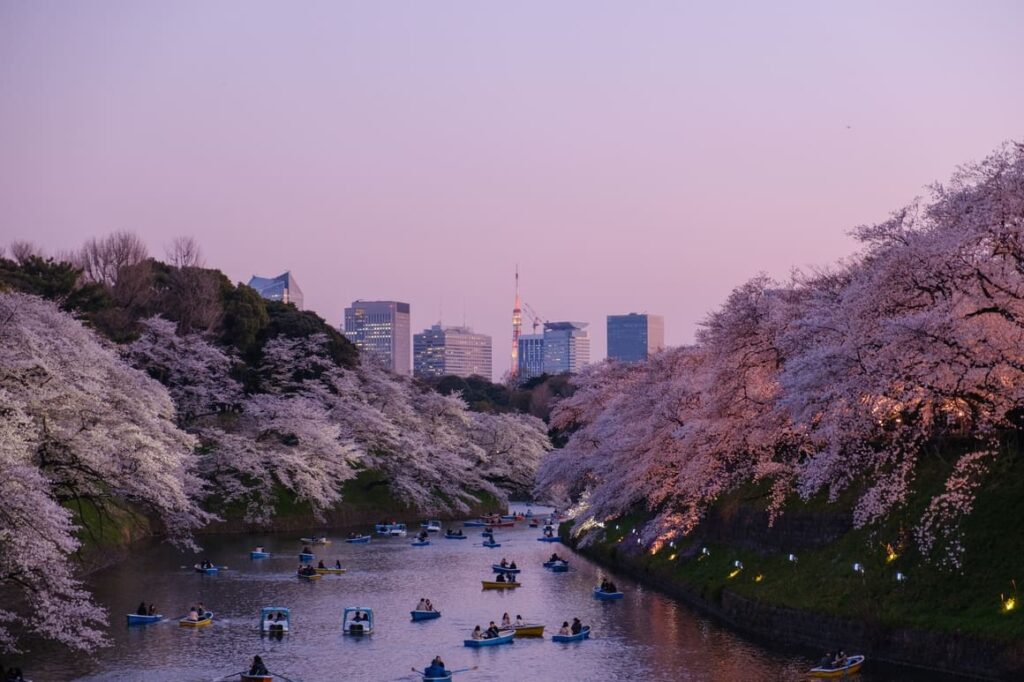 Contents show
Life in Japan
For Pinterest!
Daily Life in Japan. 10 Habits That Make Japanese People Super Chilled.
#1: The 7 Eleven
#2: Karaoke
#3: The Japanese Bathroom
# 4: Meal Times
# 5: Japan Train Etiquette. (Rules That People Obey).
Buying a Japanese Rail Pass
# 6: The Onsen
# 7: Sake
Watch our video and see for yourself how calm life in Japan really is!
# 8: No Litter. Anywhere
# 9: The Cherry Blossom
# 10: The 100 Yen Store
Other related posts you will enjoy!

Japan is one of the most unique destinations in the world that people long to visit, and we were lucky enough to spend three weeks backpacking around Japan as a family.

It was on this trip that we witnessed many reasons why, this country, with a population of over 127 million could sometimes resemble life on a desert island, causing the Japanese people to be chilled out and relaxed but still incredibly efficient.

If You Would Like To Know How you Can Travel to Places Like Japan Without It costing You a Fortune Then Sign Up To Grab Our Free E-Book! 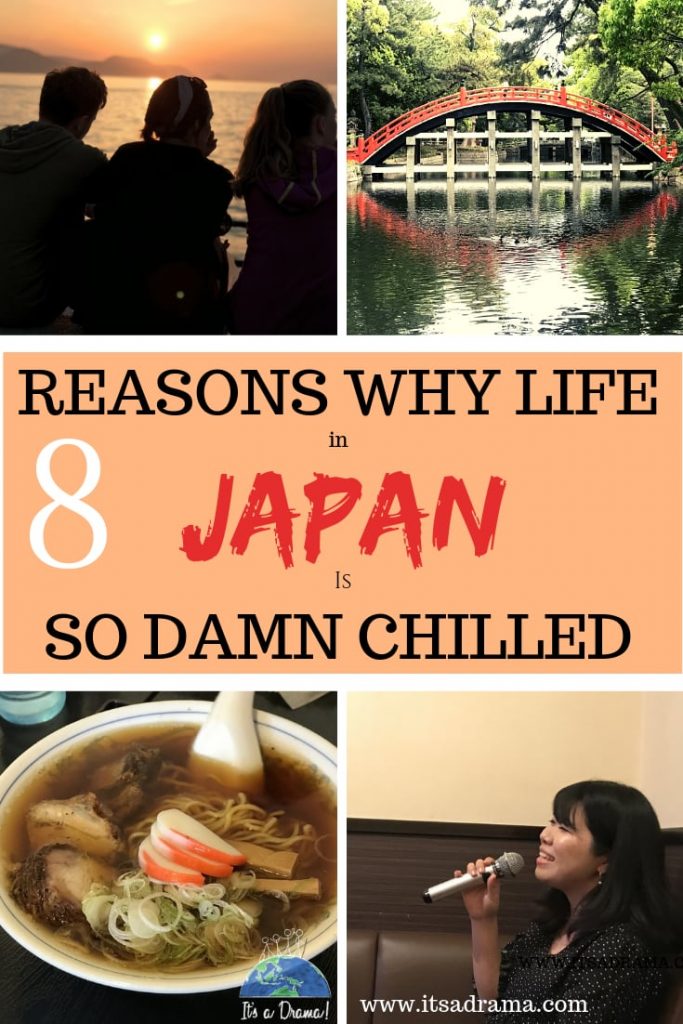 Life in Japan is made all the less stressful by these gems on every street corner. Grab yourself a three-course lunch for next to nothing or stand a read a magazine for thirty minutes. The staff are super friendly and encourage it.

To the Japanese people, karaoke is part of their life. What better way to relax and release endorphins than to have a good sing-song.

Just a little at a time. no need to gobble your food as quickly as you can and give yourself indigestion. Little and often seems to be a common practice in Japan.

Japanese people always appear to be busy. They move about the streets and railway stations like those little wind-up dinkey cars with new batteries. But they do so in silence. Calmly. On the whole, daily life Japan is super calm.

No pushing, shoving and elbowing people in the ribs in Japan thank you very much. No.  Everyone understands the rules and abides by them.

Life in Japan is orderly. Where you find a mass of people, you will find rules.

Japan train etiquette is something to be marvelled at.

Thickly painted yellow lines on railway platforms that you must stand behind. Allocated waiting bays for the carriage that matches with your ticket. Seats on the train that are reserved for the elderly or infirm. Stairs in the railway station or in airports with arrows indicating that you go up on the left and descend on the right.

And guess what? Nobody breaks these rules, causing nobody to become anxious and cheated. Easy peasy Japan. Make the rules and stick to them. Perfect idea.

A typical scene at a Japanese railway station. Packed full of people and you could have heard a pin drop. Everybody knows the rules and sticks to them creating a feeling of overall calm.

If you are visiting Japan and you have a planned itinerary that takes you all around the country (a must!) then buy a Japanese Rail Pass.

It will not only save you a stack of money but (more importantly) it will save you the stress of having to line up and hope that trains have the availability that you need.

Riding the Shinkansen from Tokyo to Osaka is an experience you cannot miss when in Japan!

There are a couple of other companies that sell JRP tickets but please. Do yourself a favour a buy them straight from the legit company.

If you have any more questions about taking the train in Japan then check out the Japanese Rail Pass Forum. It is a free resource and gives you invaluable advice about travelling in and around Japan by train.

Watch our video and see for yourself how calm life in Japan really is!

Everywhere you look there are people cleaning up. I don’t know what they find to sweep up as there isn’t any rubbish, but there you go.

There is no denying that Japan is one of the most beautiful places on earth, and nothing is more gorgeous than the sight of a cherry tree weighed down with baby pink blossom

The arrival of the  Sakura in Japan is something of a yearly celebration. Known as a hanami party, the Japanese people get together with friends and family and celebrate under the beautiful trees with good food and drinks. We all like a party.

Especially one with lots of pink confetti and knowing that they have this celebration every year must make life for the people of  Japan very exciting.

The perfect excuse for a party. The arrival of the sakura, otherwise known as cherry blossom season. 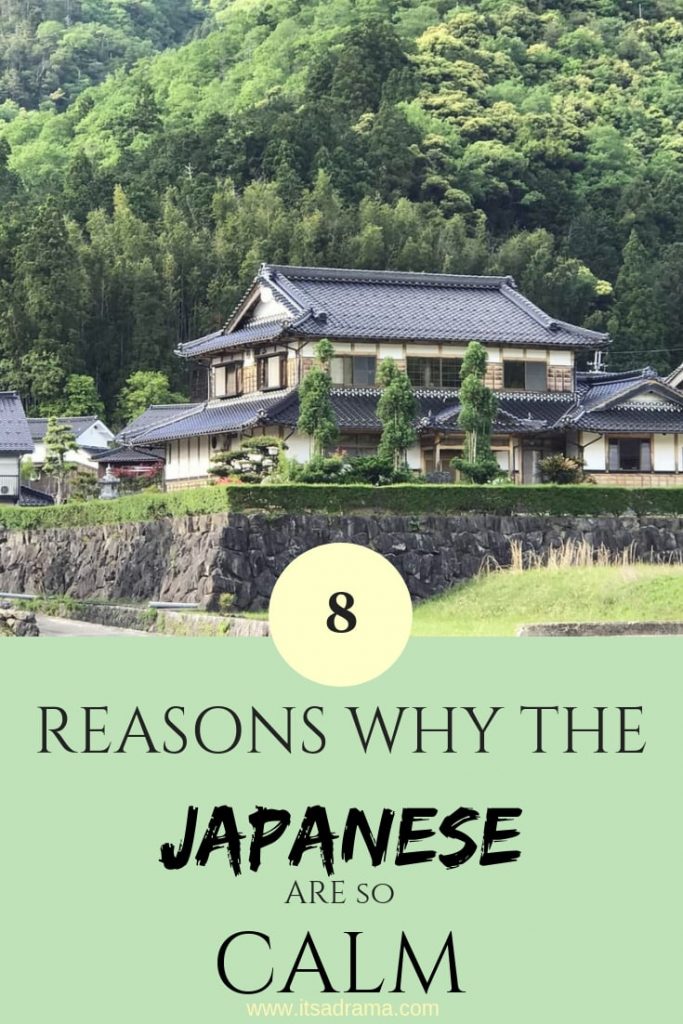 Other related posts you will enjoy!

How Travel changes your perspective. For the better.

5 easy tricks to make your life much easier in 2019

25 Awesome travel gifts for kids. All for under $20

So there you have it.

The list of ten habits that the Japanese people practice on a regular basis, things that make daily life in Japan a little less stress-free and calm. I don’t know about you, but I think we could all do with a few pink blossom parties in our life! What do you think? Is Japanese life for you?