Vietnam. 7 Scams That You Need to Know About.

Vietnam is a country full of beautiful scenery, fabulous food and a laid-back lifestyle.

A place that will entice you to sit in the sunshine,  sip iced coffee and devour a warm banh mi baguette crammed with pate, meats and salad, it really is one of the worlds most unique travel destinations.

Vietnam also has a few scams up its sleeve.

Waiting to play out on unknowing tourists. Scams that no Vietnam travel blog ever seems to tell you about.

So here I am. Your new best friend.

This post may contain affiliate links. they cost you nothing but we make a small commission.

Taking a Trip To Vietnam

Contents show
Taking a Trip To Vietnam
A Vietnam Travel Blog. 7 Scams To Look Out For
#1 The Old Taxi Fare Scam.
#2 Syphoning Petrol From Your Moped Scam
Related posts That you Will Enjoy!
$3 Smile For The Photo Scam!
#4 Parking Your Bike at the Beach in Hoi An.
#5 Two Menus Scam
#6 Charging You Extra for Your Bags on the Bus Scam
#7 Playing the Haggling Game at the Markets.
But It’s Not All Doom And Gloom!
FAQ About Travel In Vietnam
Getting a Visa For Vietnam
One Last thing About Vietnam
Related Posts That You Will Enjoy

Me and my husband took our two teenage kids to Vietnam for five weeks last year; as part of our year-long round the world backpacking trip and we all absolutely loved it.

But only after we had become wise to a few of the Vietnamese scams.

We have been to India, where every man and his stray dog were trying to catch you out with some sort of trick, then on to Thailand where travelling was simple. And eventually landed in Vietnam.

We travelled by bus from Hanoi to Mai Chau where we were lucky enough to sleep in a Thai stilt house next to rice fields, before making our way down through the country.

We took a sleeper train to Phong Nha and then went on to relax in Hoi An for three weeks.

The reason I’m telling you this is so that you know we did a fair bit of travelling within the country. What we found while touring around was that the scams in Vietnam appear to be nationwide. 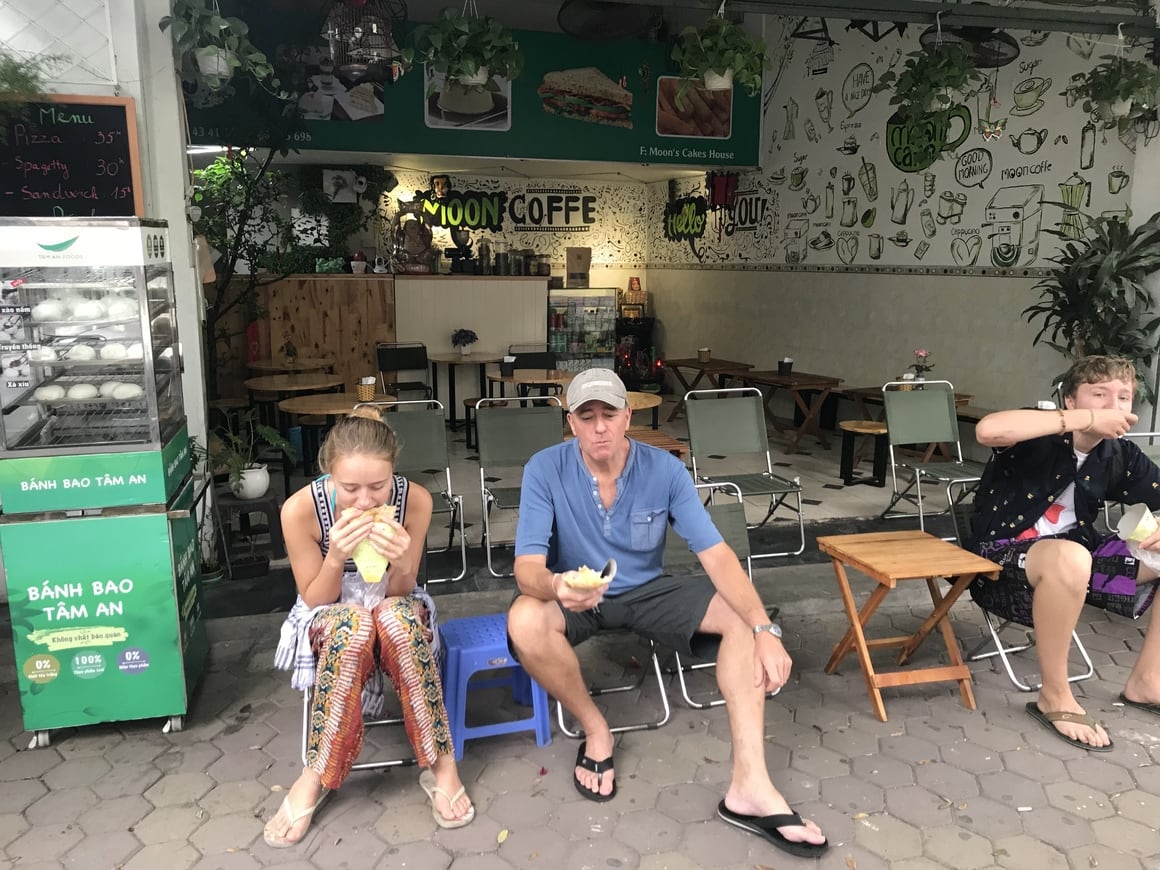 PIN THIS FOR LATER! 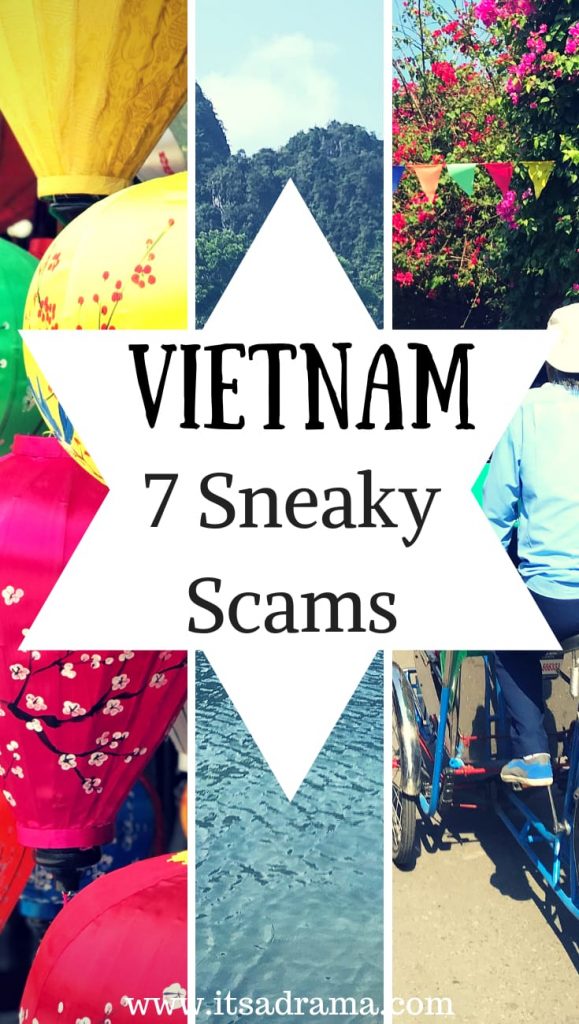 A Vietnam Travel Blog. 7 Scams To Look Out For

I’m not going to lie, our first few days in Vietnam weren’t easy.

We were conned with a few cheeky scams before we’d even ordered our first egg coffee (which I highly recommend by the way).

This continued until we finally hardened up and got wise to the tricks. Here are a few things you need to be one step ahead of when visiting Vietnam.

When taking a taxi in Vietnam allow around 15,000VND per kilometre and you won’t be far wrong.

#2 Syphoning Petrol From Your Moped Scam 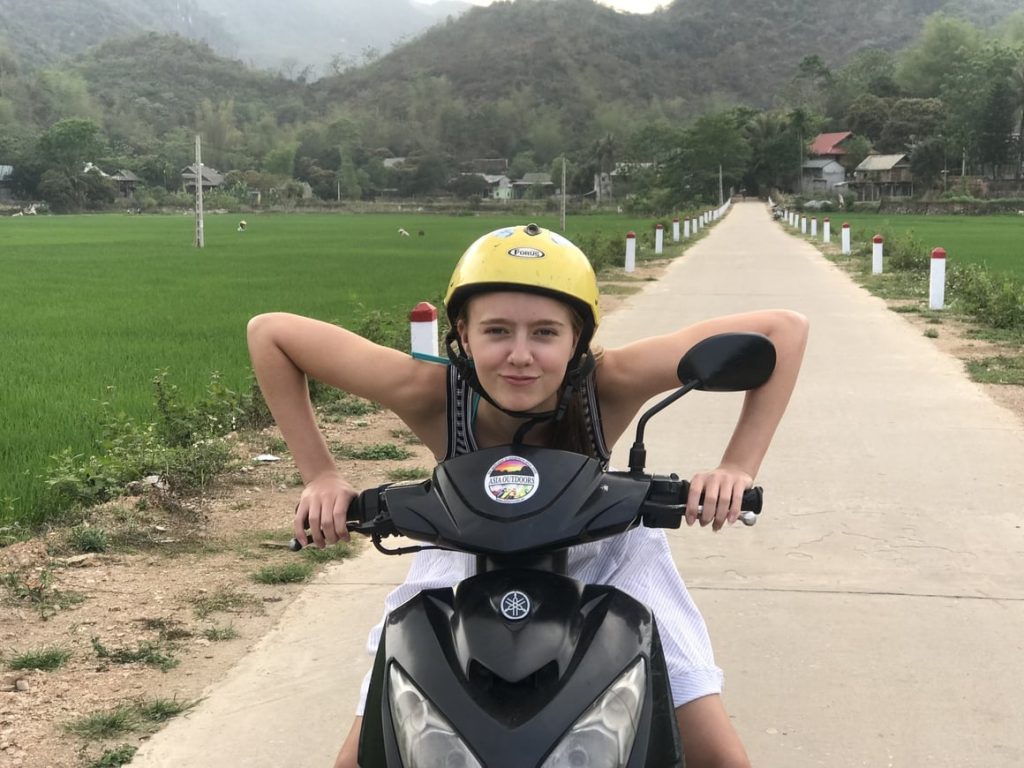 Beware of the hotels taking the petrol back out of your tank and selling it back to you at the side of the road!

If you hire a moped from a guest house or a hotel make sure you keep the keys until you have finished with the bike or else just fill it up in $2 increments. Just down run out of fuel halfway up a mountain!

Related posts That you Will Enjoy!

Going on vacation. 39 things to remember before you turn the key.

Optimistic traveller or doom and gloomer. Which are you?

Couchsurfing with kids. Will we be murdered and other FAQ

How we saved ten grand by housesitting in Europe.

$3 Smile For The Photo Scam! 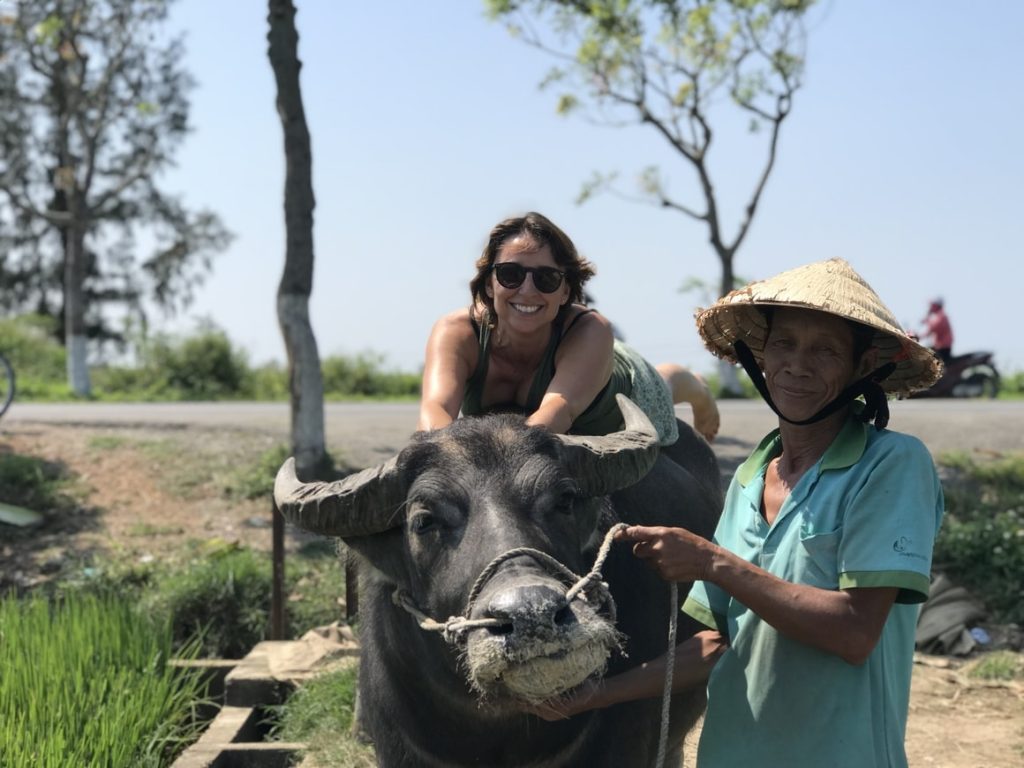 Yes. you are smiling now. You won’t be in a minute when he turns nasty.

This only happened to us once when we were in Vietnam but it is worth mentioning as it was a bit of a shock.

Be aware that the man and his cow at the side of the road in Hoi An will want to be paid for a photograph. If you haven’t got Vietnamese Dong, he will take American dollars.

#4 Parking Your Bike at the Beach in Hoi An. 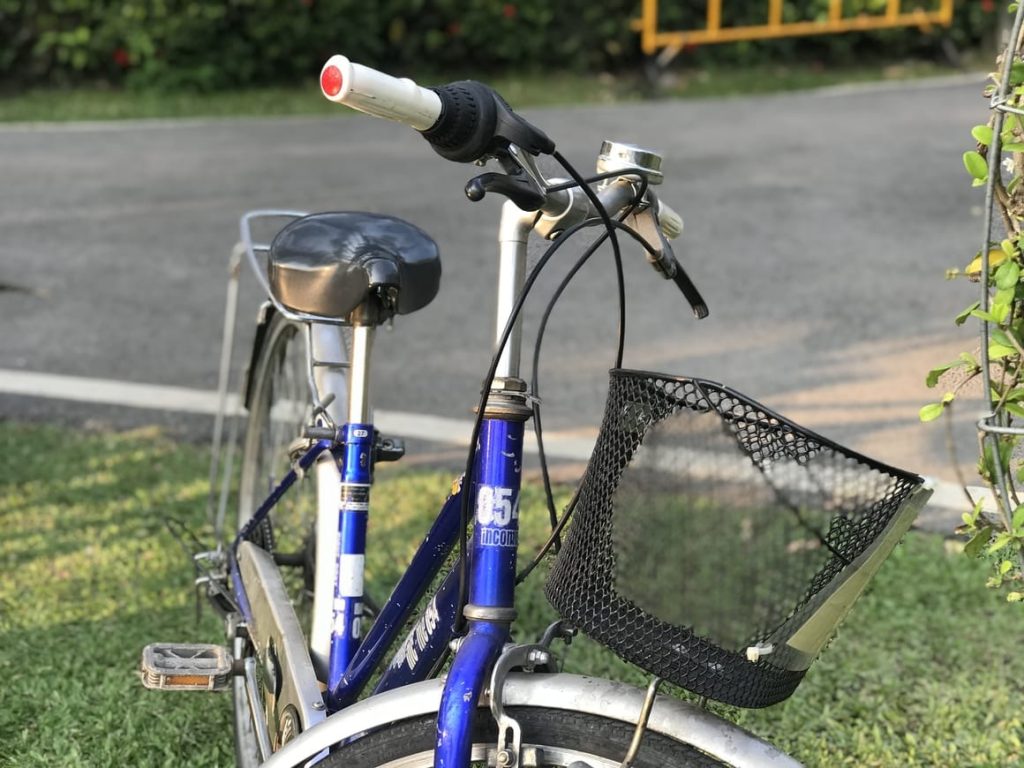 Look for somewhere you can lock up your bike for free rather than having to pay.

This isn’t really a scam, but just another way of getting money out of tourists. Still, you need to know about it.

If you are cycling to the beach in Hoi an, don’t be intimidated by the parking lot owners who will tell you that there is only one place to park your bike (at a cost). Cycle down one of the side streets. They all lead to the beach, and you can park your bike for free. 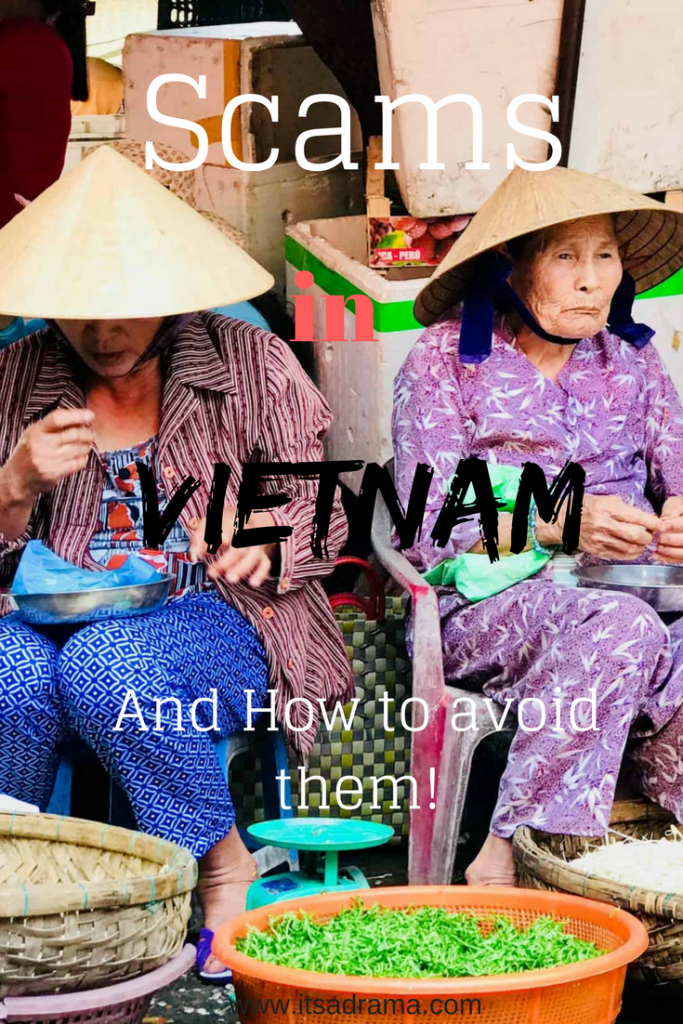 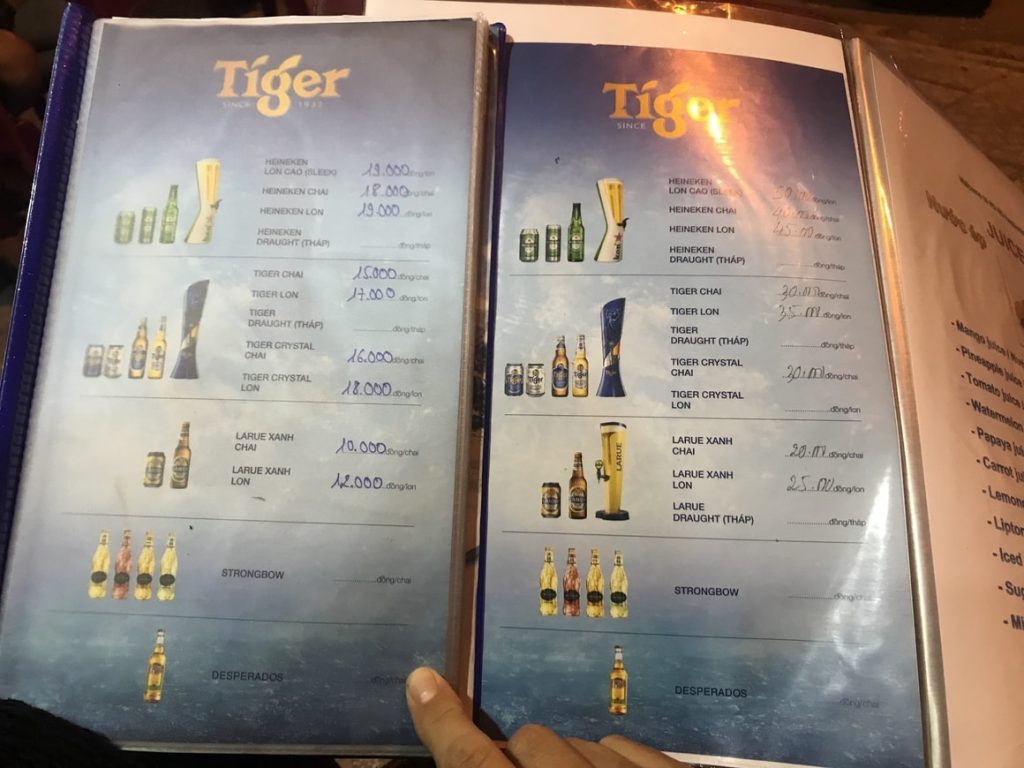 Two menus. One with the price for the locals and the other – almost double – for the tourists.

This only ever happened once, but it got right up my nose.

If you are only offered one menu in a restaurant do a bit of snooping around. Look for another one, preferably one that the locals are ordering from. And if the prices do seem a little over the top compared to everywhere else, ask why!

#6 Charging You Extra for Your Bags on the Bus Scam 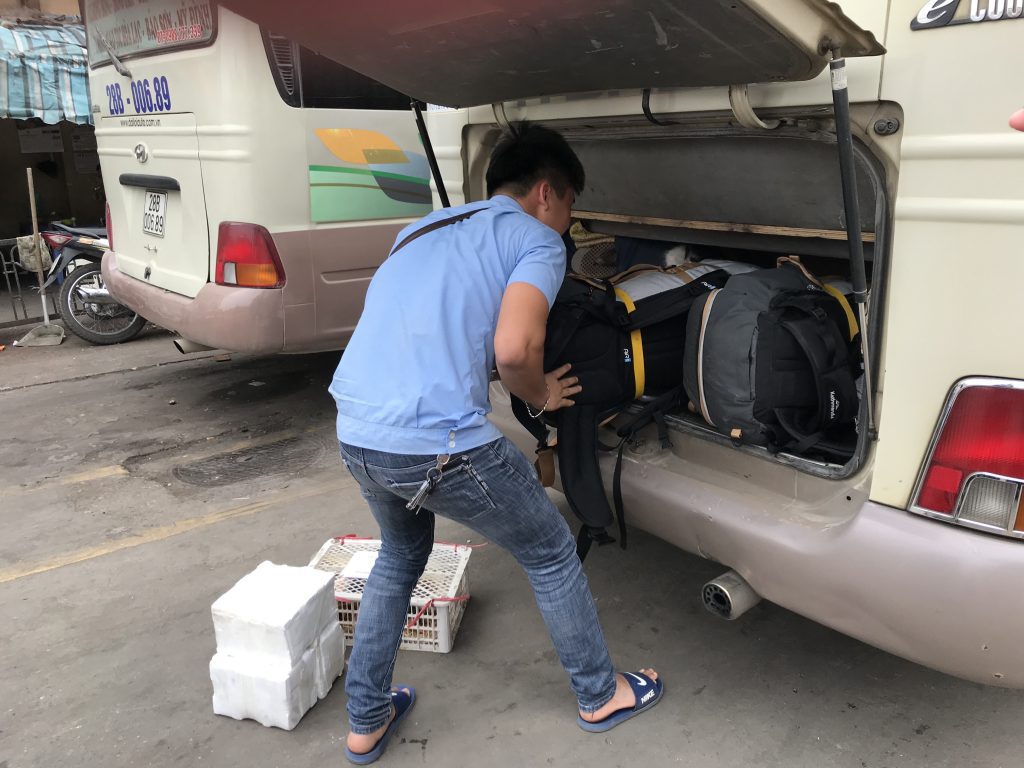 Move over chickens. This is where your backpacks will go. If not here then on the back seat.

We have travelled by bus all over Asia in order to save some dosh,  and we have enjoyed all of them. Ok. Maybe not all of them. Maybe not the sleeper bus in India which quite frankly was hell on earth.

Luckily I had already been warned about this in a previous Vietnam travel blog, so I was ready for it. The price you pay for a bus ticket INCLUDES your bag. Don’t pay any extra to the driver or his helper once you are on the bus.

#7 Playing the Haggling Game at the Markets. 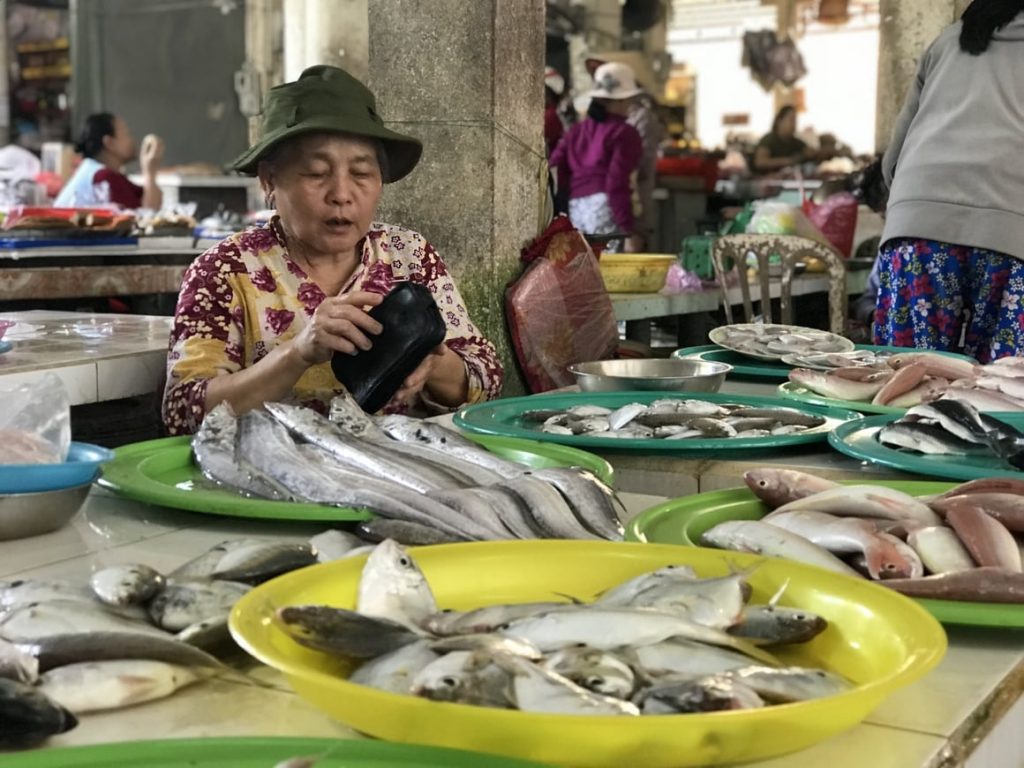 Even things like fresh fish can be haggled on. If the price seems high, go to another stall and compare.

It wasn’t until I stood beside some unknowing tourists at the markets and witnessed them paying double for their goods that I realised that perhaps not everyone is aware that you must haggle for your goods in Vietnam.

A trip to the market should be fun. Make it this way by exchanging in friendly haggling. Start off at half the price and work your way up. If you walk away and the stall owner doesn’t call after you with a lower price you know that the price you were quoted was a good one.

But It’s Not All Doom And Gloom!

Some of these scams are to be taken with a pinch of salt, and some (like the man and the cow who got quite nasty) need to be taken seriously.

Every country has its way of getting money out of tourists and Vietnam is no exception. As a traveller, you expect to a certain extent to be taken for a ride, but let’s face it,  nobody likes to be sent whizzing down the highway with their wallet trailing behind them.

FAQ About Travel In Vietnam

Q: Do I need a visa for Vietnam?

A: Most visitors need a visa to enter Vietnam. Visa can be organised beforehand online through the Vietnamese Embassy website or through an agency. These are called E.Visa. Once you are granted a visa approval letter you must arrive at a Vietnam international airport to have your passport (which must be valid for at least 6 months) stamped. (Please check the government website for up to date information regarding visa entry.

A: I am a US Citizen. Can I enter Vietnam for 15 days without a visa?

Q: No. Some countries are granted entry into Vietnam for 15 days without obtaining a visa. These countries include the UK, Japan amongst others. A Vietnam visa is required by all US citizens (and New Zealand).

Q: Is Vietnam safe for tourists?

A: We were there as a family of four for five weeks and never encountered any trouble, theft or violence. Vietnam feels very calm and safe and I would happily recommend anyone to travel there.

Q: What should I avoid in Vietnam?

A: Getting scammed! If you read everything in the above post and avoid those situations then you will be fine!

Getting a Visa For Vietnam

It’s a shame;  one of the things we heard a lot when we were travelling was that people were avoiding Vietnam because of the visa situation.

For some reason, they had heard that it was a long laborious procedure and required lots of paperwork and waiting around.

I felt so strongly about this that I wrote a post called travel tips that people give you that are crap.

Getting a Visa for Vietnam is easy peasy. You can either apply online directly to the Vietnamese Embassy or you can use a company such as s The Vietnam visa company.

This is who we used and it was a piece of cake. They organise the letter of approval for you, you arrive at an international airport with the letter and all you have to do is get your passport stamped.

Yes, you may pay a couple of dollars for someone to sort it out for you, but seriously, it is still very cheap and is worth every cent.

Check out how you can get your Vietnamese visa without any hassle here.

One Last thing About Vietnam

Vietnam is an amazing country and almost everyone we met was generous, friendly and kind. It is also worth mentioning that Vietnam is also the cheapest place we have travelled to in Asia so if you are on a budget you are going to love it!

How people on a regular wage afford to travel the world

Travelling with kids. How to stay sane before wine o’clock

The real reason that people travel

10 Essentials for the plane that will leave you feeling semi-human when you arrive at your destination.

I hope you enjoyed this honest travel blog on Vietnam. If you are in Vietnam and have been scammed let me know and I will add it to this list in order to help others! And please tell me it didn’t happen twice.